Please Select a Section to Skip to

SUPERCROSS ROUND 3 AT SAN DIEGO 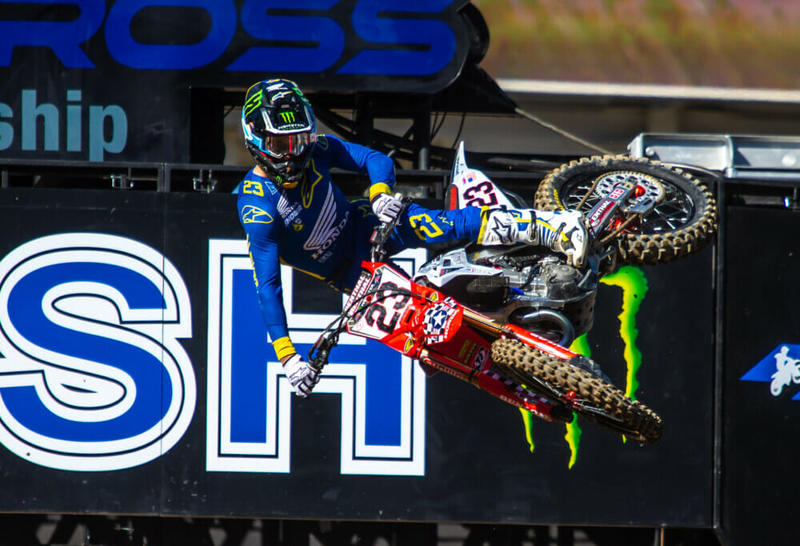 Coming into San Diego, it’s Justin Barcia who holds the points lead and the red plate in the 450 class. He’s followed by Jason Anderson and Cooper Webb who are both tied for second, 3-points behind Barcia. Aaron Plessinger is fourth in points, 4-points back with Tomac and Roczen tied for fifth, 5-points off Barcia. Things are close coming into Round three and a long whoop sections mixed with slick straightaways will make for some exciting racing.

Cooper Webb grabbed the holeshot in the first heat race with Musquin and Roczen right behind him. Marvin was able to get by Roczen, then he was passed by the Honda rider for a brief moment, and then Marvin got by him again. Cooper Webb had a slight gap, but Musquin and Roczen began to close on the final two laps. Dean Wilson was forced off the track on the first lap, but he put on a charge from about 15th to 8th to qualify straight into the Main Event.

There was a first turn pile up in the second Heat race with Aaron Plessinger on top of Joey Savatgy. Joey was unable to rejoin the race as his front wheel was locked up from the crash, he limped off the track nursing his knee that has already been injured. Alex Martin grabbed the holeshot on his ClubMX Yamaha and led for the first lap and a half until Jason Anderson snuck up the inside of him. Jason rode a smooth race to take the win while Eli Tomac battled hard with Justin Barcia, sneaking by him in the corner after the whoop section. Chase Sexton was buried in the pack early, but he caught up to Barcia and Tomac in the final laps.

Surprisingly, after Adam Cianciarulo pulled off in his Heat race, he did not line up for the LCQ. Also missing from the LCQ is Joey Savatgy after his first turn crash with Plessinger. Both Joey and Adam are nursing injuries. Kyle Chisholm got out front early and rode a smooth race to take the win. After his rough LCQ last weekend, Ryan Breece made it through safely in second place this time. Freddie Noren was third with Josh Hill fourth, but Noren slid out after the whoops and dropped back to fourth. Then, Alex Ray saw an opportunity and tried to dive bomb Freddie, but he hit the back wheel of Noren and went down hard. Noren, somehow stayed on two wheels and took the final transfer spot into the Main event.

Chase Sexton was finally able to get his first 450 Main Event win after grabbing the start, passing Marvin Musquin and pulling away. Behind him there was lots of chaos, including Jason Anderson coming through the pack all the way to second and then dropping back slowly due to a bike malfunction.

Justin Barcia was docked one position (from 8th to 9th) in the 450 Main Event for taking out Justin Bogle. With that, he lost one point going from 57 to 56 total points. 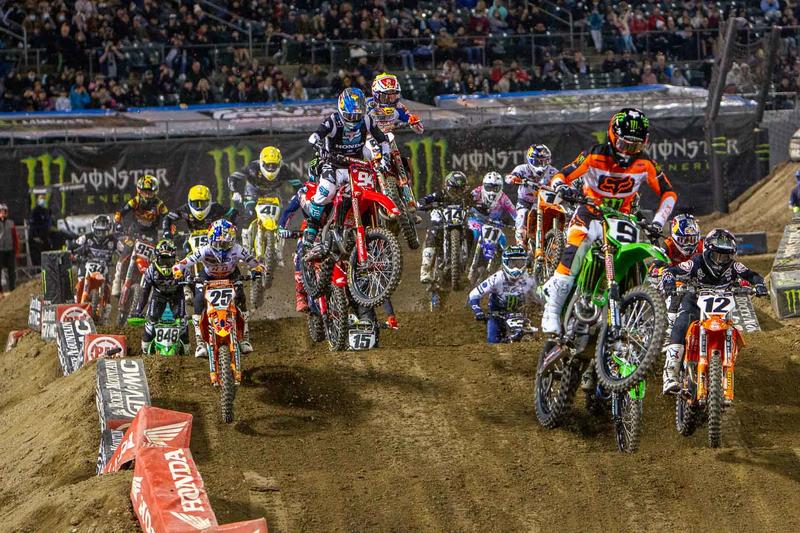 The San Diego Supercross is round three of the 2022 Monster Energy Supercross season and coming into this race, it has been Christian Craig who has won at both Anaheim 1 and Oakland. Michael Mosiman has been quick in qualifying and has won both of his Heat races at the last two rounds, but he’s crashed in both Main Events, causing him to have to come from the pack to finish 6th at A1 and 4th at Oakland. Hunter Lawrence has been consistent and quick with a third and second so far and Seth Hammaker was consistent as well, but unfortunately he will miss the San Diego Supercross and more of the following races after he crashed during the week and injured his spleen and back.

Carson Mumford grabbed the holeshot and amazingly lead the first two laps on his BarX Suzuki RMZ250, but it was Hunter Lawrence who was able to make the pass on him and later Chris Blose and Garrett Marchbanks got by as well. Jerry Robin was battling hard for a transfer position and actually was ran into on the landing of a jump while he tried to square up another rider, but amazingly he was able to stay on two wheels and keep racing.

Vince Friese started up front early and he led for about a lap and a half until Christian Craig got around him in the whoops. The track is currently slick here in San Diego and the riders were searching hard for traction in the corners and straightaways. In the end, it was Christian Craig who was able to get by and win with Michael Mosiman making an aggressive pass on Friese to get into second. Mosiman caught Craig towards the end of the race, especially when lapper came into play.

Michael Mosiman grabbed his first holeshot of the season and held onto it with Hunter Lawrence second. Christian Craig went down hard in the first turn, but he was able to rebound and come all the way from practically last to finish third place and salvage an 11-point lead.

Point Standings After 3 Rounds in 250 West

While great effort is made to ensure the accuracy of the information on this site, errors can occur.
Please verify all pricing information with a customer service representative.
This is easily done by calling us or visiting us at the dealership.

Listed below are your saved and recently viewed vehicles

You can also view your saved vehicles on other devices. Sign up

Have your vehicles with you

Save your favorite vehicles for later viewing on your desktop or mobile devices.

Keep track of all the vehicles you've viewed for a better car shopping experience.

Narrow your search by comparing your favorite vehicles.

Get a Quick Quote